Read our blog series titled "Tales from the Dragon's Den" to stay up to date on changes in the game and fun community events. 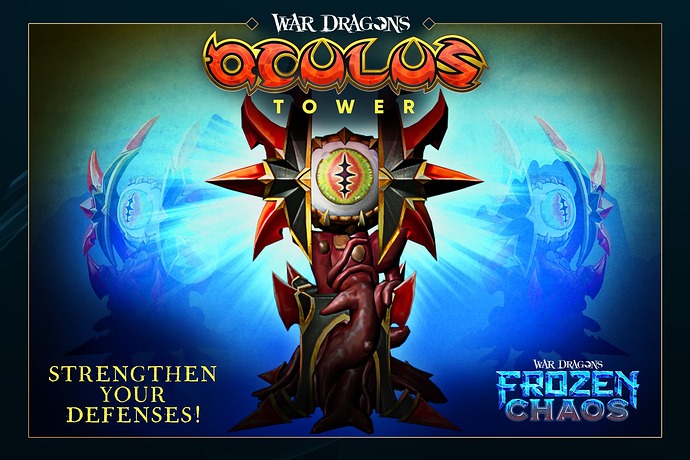 In this time paralyzed by disorder, a living tower, once thought to be destroyed eons ago, has started to stir. The chaos of the ongoing battles with the Frozen Chaos dragons have awoken the Oculus from its cellular coma! How soon will this tower turn its watchful eye on your enemies?

The new Oculus Branch will cost 39k Frozen Chaos Sigils and contain 6 Frozen Chaos season keys plus 2 Ascension Tokens! The branch will contain a healthy amount of both Electrum and Timers.

What to expect from the Oculus Tower’s regular attack?

What is the Oculus Tower’s Supershot ability?

The Oculus Tower’s Supershot fires a projectile that decays a large portion of the target’s HP every second and reduces the amount they can heal.

What is the range of the Oculus Tower’s regular and Supershot attacks?

What’s the best strategy for building the Oculus Tower?

The Oculus tower is incredibly powerful, but unlike other towers, the damage from the Oculus Tower comes over time, instead of in one big burst. This tower is at it’s best when used against dragons that rely on healing spells to sustain them in battle. Any dragon hit with the supershot from the Oculus Tower will have reduced healing for the rest of the battle! Line up a long range supershot on a beefy dragon and it’ll struggle to survive.

How many Oculus Towers can I build?

Sharing the same restrictions as the Earth Flaks and Drakul Pylon, you can build 1 per island and 8 total.

At what level can I build my first Oculus Tower?

When will the Oculus Tower become available?

The Oculus Tower will be available alongside this week’s Fortification Frenzy event.

How do I upgrade the Oculus Tower?

The Oculus Tower can be upgraded using Cosmic Charges and Electrum Bars, which can be obtained from the new Oculus Tower Seasonal Branch.

For additional details on this tower, please visit our post in the forums.

Get the free mobile game that everyone is playing.
With your permission, we would like to use cookies to improve your experience on our websites. Do you consent to accepting these cookies?YesNoMore Info